How to use Moving Averages in Trading? 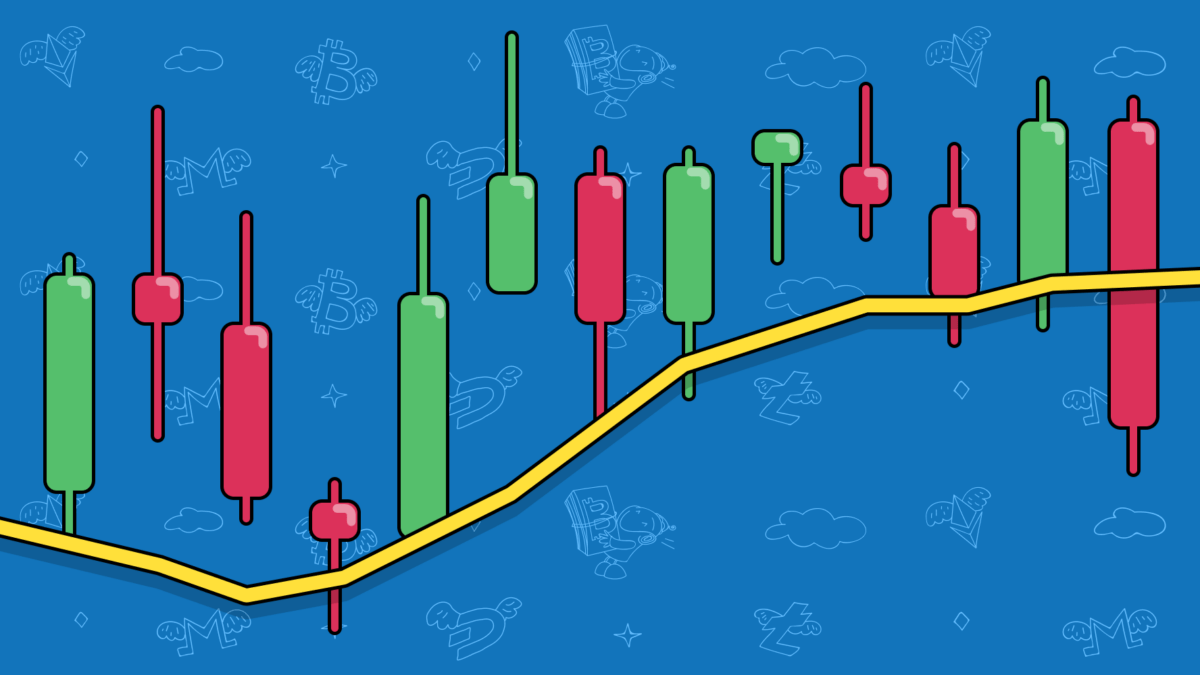 MA is one of the most popular technical indicators. What is it, which MA crossovers exist and how to interpret Golden Cross and Death Cross? Learn more!

What is a MA in Trading?

A moving average (MA) is an indicator in technical analysis often used to determine the trend direction. It sums up the data points of a crypto asset over a certain period of time and divides the total by the number of data points to arrive at an average. This average is called moving because it is continually recalculated based on the latest price data. When used together with other indicators, moving averages provide a certain level of confidence, especially if you want to make sure that you are going to trade in the correct direction. So if you’re looking to predict market moves or, even more so, if you’re looking to predict market moves in a rapidly changing political or economical situation, probably you can find a more suitable technical indicator than moving averages. By design, MA describes only what has already happened because it takes into consideration a whole range of past price movements.

TradeSanta’s guest expert, Barry Weinstein, the founder and CEO of VolatilityMarkets Newswire, also adds that moving averages are a way that technical traders try to estimate a price’s acceleration or cheapness/expensiveness by comparing the last price to an average of historical prices.

Take a look at the 3-month chart up above and interpret what you see. The thin blue line is the 200-day MA, the bold blue line is the Bitcoin price in the summer of 2022. Is the MA on the upswing or on the downswing on this chart?

As you can see from the chart, the moving average always follows the price of the asset and in the summer of 2022 was bearish until mid June. Only later, into July and August, it started to look slightly more bullish.

TradeSanta’s guest expert, Adam Bém, the COO & Co-Founder of Victoria VR, says that moving averages are definitely useful in traditional trading, but he finds that their utility is fairly limited in the crypto markets. “Because the crypto community is so expansive,” he says, ”moving averages can be great tools for education, allowing traders to visualize the history and potential for growth of coins they’re unfamiliar with, but I don’t think they work as a reliable predictive tool.”

Even though all moving averages are common in a way that they smooth out price data by constantly creating an updated average price, there are different MAs out there.

What is a Simple Moving Average (SMA)?

TradeSanta’s guest expert Marc Arbonés editor and founder of Altcoins Mastery, says that he enters the position using moving averages (200, 50) in conjunction with support and resistance levels (on different timeframes, Weekly and Daily mostly). HHLL (Higher High & Lower Low) analysis is good to identify the direction and gauge the strength of a trend, and chart patterns send entry signals. “If all of the indicators point to a bullish trend, I might consider going long”, Arbonés says.

When there is a Higher High, in other words when the price closes higher than the day before, this is a signal of greater confidence and a possible trend for further higher prices. On the flip side, when there is a Lower Low, this suggests that confidence is lowering and the price will fall.

What is an Exponential Moving Average (EMA)?

K = Exponential smoothing constant. K equals to 2/(1+N) where N is the number of days.

The main difference between Simple and Exponential Moving Average lies in what situations you might want to apply these averages. The SMA has a much closer relationship to areas of significance such as traditional Support and Resistance levels and, thus, is good to set up stop-losses. The EMA, in essence, is the same moving average, but it is slightly more sensitive and reacts to the change in price quicker than the SMA. This accounts for why EMAs are popular among day and swing traders. They use these averages to confirm market moves and gauge their validity.

But again, remember that both these indicators are lagging and were not designed to forecast the price movement in the future.

One picture is worth a thousand words, so take a look at the chart down below to get a better understanding of the pattern.

Golden Cross never guarantees a bullish trend, despite its apparent predictive power in forecasting prior large bull markets. Remember that this pattern is formed out of two lagging moving averages, so it can’t be the most trustworthy indicator. You need to confirm it with other signals before putting on a trade.

The Death Cross crossover we’re going to discuss next is the opposite of Golden Cross and it signals an upcoming bearish market.

Even though the Death Cross pattern signals an upcoming bearish sentiment, you shouldn’t be afraid of such an ominous name. Normally, it precedes a near-term rebound with considerable returns.

Falling victim to a sample selection bias, some analysts have noted that the Death Cross has preceded all the severe bear markets of the past century in traditional finance, including 1929, 1938, 1974, and 2008. But more pragmatic analysts have argued that there were  many more numerous occasions when the Death Cross signaled nothing worse than a market correction. Moreover, in recent years, the Death Cross pattern was often followed by the bigger gains.

Note that even though the Death Cross can indicate that a prolonged uptrend has run out of its momentum, just like the Golden Cross, it needs to be confirmed with other technical indicators.

The most significant difference between Death Cross and Golden Cross lies in the signals that these indicators send. Many investors view Death Cross as a bearish indicator, while Golden Cross is considered to be a bullish signal.

The only problem with using moving averages is the following: it shows an important market move that might have already happened in the past, which means a trader will enter a position too late. So be careful while using either MA crossovers or an MA itself.

There are no correct settings for using moving averages. If you want to figure out which time frame works best for you, just experiment with different periods, and soon enough you’ll adjust. And remember, just like Marc Arbonés says, editor and founder of Altcoins Mastery, any “trading tool is normally not used in isolation but in conjunction with other tools and a decision-making process (typically, a checklist) to determine if a trade is worth taking.”

Still not sure how to use the moving average trading strategy and would rather trust professionals to automate the process? Just create an account with TradeSanta, connect your exchange via API keys, create your bot and toggle on all the technical indicators already set up by the team of experts.