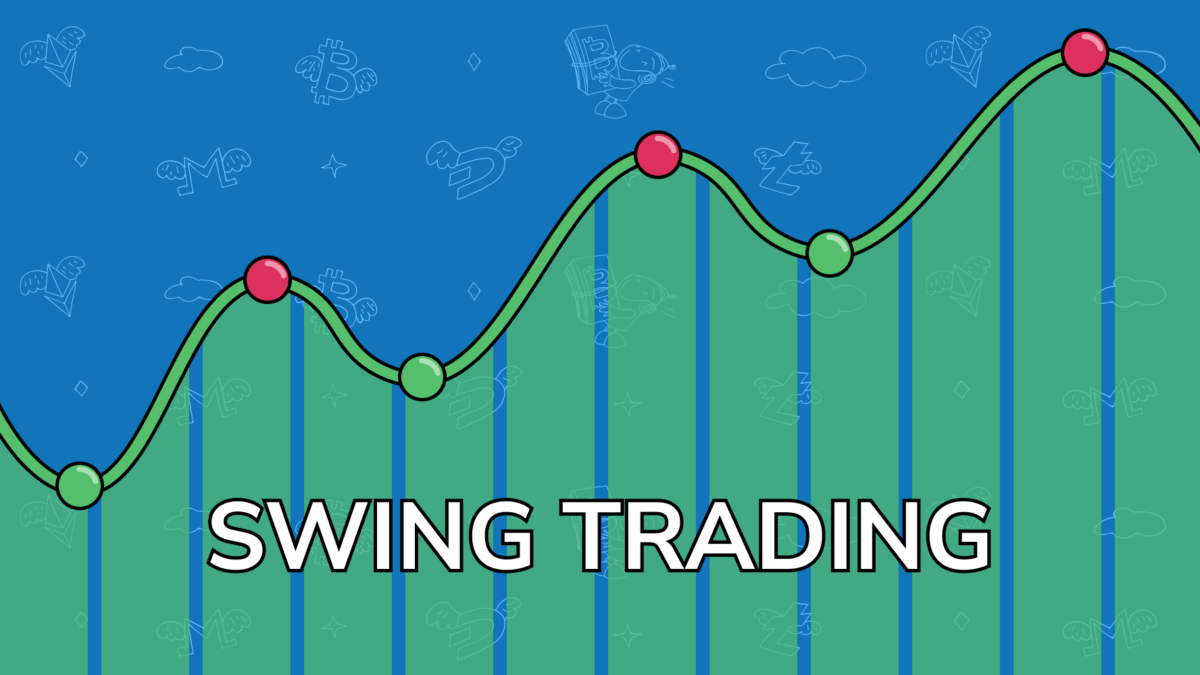 For those of you who want to increase your profits while swing trading, we’ve prepared a list of technical indicators to help you with the mission. Read on, and you’ll learn all about RSI, Stochastic, Ease of Movement, Bollinger Bands and Volume Oscillator.

What is swing trading?

Swing trading is a trading type where traders target short- to medium-term gains over a time frame of a couple of days to a few weeks. Do you prefer to look at the bigger picture? Put swing trading somewhere in between day trading and buy-and-hold investment type.

Swing traders tend to make a lot of small wins, and in the long run, these gains might even exceed the gains of a trader who waits for months to win big. The goal here is to catch the trend and close as many deals as possible.

A primary challenge for all swing trading strategies is identifying when to enter and exit a trade. So, if you want to start returning small consistent earnings, you need to learn how to apply some strict money management rules that are probably based on technical analysis.

If you’re not sure that you will be able to keep your head clear amidst the crypto trading ocean, maybe an optimal way to adhere to following the rules for you is automated software.  Crypto trading bots are not susceptible to emotions and use a range of specific indicators to enter and exit the market.

As we’ve explained earlier, in swing trading, it’s important to catch the trend. Let’s investigate the best indicators for swing trading that will help you to do so.

RSI, or Relative Strength Index, is one of those indicators that might help you catch the trend as it sends you signals of whether the market is oversold or overbought. If the asset is oversold, it means that it has traded lower in price and has the potential for a price bounce. The situation represents a good buying opportunity for long-term investors betting against the bearish trend. But it is also a great fit for swing trading.

Traditionally, while using RSI, traders set up the values of 30 and 70 to spot oversold or overbought signals. But the settings could be different depending on your approach. Take a look at the chart above, and you will spot the signals based on the settings of 30 and 70.

Based on the settings of the chart up above, on April 27, we can see an uptrend on the graph, but the sell signal has not been sent yet.

Take a look at the chart. No, this is not a cardiogram. This is the Stochastic Indicator. Just like RSI, Stochastic falls into the class of so-called oscillators, shows you whether the asset is oversold or overbought and can help you level up your swing trading game.

The values of the Stochastic Oscillator are normally plotted in a range between 0 and 100, and very often traders set them up in the way that below 20 means an oversold signal and above 80 means an overbought signal. But again, you can set up your own values depending on your strategy.

Despite the similarities with RSI, you should understand that the Stochastic Oscillator is not the same as RSI.

While RSI measures the velocity of price movements, Stochastic shows the market’s sentiment at the end of the day. It is based on the idea that only the closing price defines the trend.

If you take a look at the graph, you will see that this swing trading indicator showed an uptrend on April 27, but then, the situation changed, so a good selling opportunity was really brief.

Richard Arms, the inventor of the Ease of Movement indicator, has believed that based on how easily a price can move up or down within a directional movement, you can predict an upcoming trend.

In theory, if prices move easily, they will continue to do so for a period of time. But how can one calculate the “ease”? According to Arms, it depends on trading volume and price.

Of course, traders don’t do it manually and use the Ease of Movement Indicator instead. The longer the oscillator line below or above zero, the easier the movement up or down. And the more probable is the trend.

On April 27, the uptrend was visible, but not strong, so the buying opportunity based on this swing trading indicator was not obvious and seemed quite risky, because it simply could have indicated a pullback after a long fall.

MACD, or Moving Average Convergence/Divergence, is a well-known and often used indicator either in the crypto niche or with traditional markets. It was invented by Gerald Appel in the late 70s to trade stocks. After 50 years since its invention, though, it’s still popular in traditional trading and now in crypto trading, too.

There are two MACD modifications: a linear MACD and a MACD histogram.

Look closely at the chart up above, and you will see that on April 27, the MACD line crossed the signal line from bottom to top, and the bars were growing, which means that it might be a good chance to buy!

One of the most popular indicators among all kinds of traders, Bollinger Bands, invented by John Bollinger in the 1980s, can be used for a number of use cases: monitoring so-called breakouts, defining overbought and oversold positions and as a trend-following tool.

Because we’re swing trading, let’s, first and foremost, spot a trend while using this indicator.

The Bollinger Bands indicator is composed of three lines. Very often the algorithms use a 20-day simple moving average (SMA) for the middle band. To calculate the upper band, they take the 20-day SMA and to that, add the standard deviation of the daily returns of an asset (calculate it here). The lower band is calculated by taking the middle band minus two times the daily standard deviation.

When the price of the asset breaks below the lower band of the Bollinger Bands, prices have perhaps fallen too much and are due to bounce. Time to buy! And vice versa, once the price breaks above the upper band, the market is perhaps overbought and due for a pullback.

Look closely at the blue bold line on the chart up above. April 6, the price broke below the band and then bounced back. On April 27, however, the price of the asset broke above the band, so does it mean that the asset’s price is due for a reversal? Maybe.

The volume oscillator, also popular among swing traders, might be one of the easiest indicators on this list to use because it only implies a number of assets traded in a given period of time. However, it gives you a few valuable insights. For example, investigating a chart, you can indicate the lack of enthusiasm or, quite the contrary, a lot of enthusiasm on the market.

As an example, let’s take a look at the histogram on April 27. The value was about 16% above the zero line, which can indicate a low enthusiasm on the market.

Swing trading is a type of trading where traders target short- to medium-term gains over a time frame of a couple of days to a few weeks. That is, the goal of those traders is to catch a momentary trend, and for that, they use a range of specific indicators. In this article, we’ve showed the range of the most popular swing trading tools, and many trading indicators fall within the definition.

RSI and Stochastic are indicators that might help you spot an opportunity in the market in a timely manner as they send you signals of whether the asset is oversold or overbought.

Ease of Movement is an indicator calculating how easily a price can move up or down within a directional movement and, thus, predicts a current trend, too.

MACD Indicator can also be a great tool in your toolkit since it consists of two exponential moving averages that cross below or above zero, thus, sending you a buy or sell signal.

Still not sure that you will not see on the chart what you really want to see? Maybe go and try TradeSanta crypto bot, then. As you know, robots don’t dream of electric sheep and simply won’t interpret chart patterns on an emotional basis. While analyzing graphs, they adhere to the strict rules, use market volatility to their advantage and are seeing patterns on the charts for what they really are.

What is swing trading?

Swing trading is a trading type where traders target short- to medium-term gains over a time frame of a couple of days to a few weeks.

RSI, or Relative Strength Index, is one of those indicators that might help you catch the trend as it sends you signals of whether the market is oversold or overbought. If the asset is oversold, it means that it has traded lower in price and has the potential for a price bounce.