What Is Crypto FUD And How Can You Spot It? 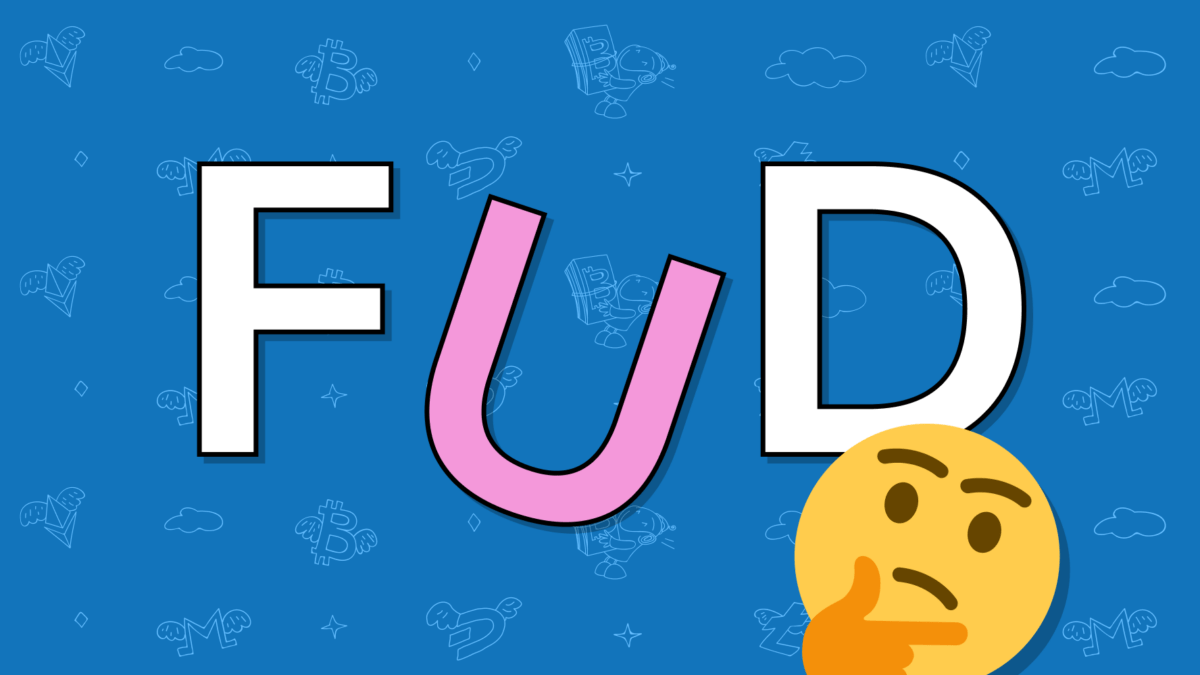 In this article, we will define what FUD (“Fear, Uncertainty, Doubt”) means, how it is used in crypto and how it can affect your investing and trading.

The roots of FUD

To begin with, FUD was not born into the crypto space-in fact, this kind of tactical movement has been used for quite a while already in traditional markets and public relations. Fear, uncertainty, and doubt stand for marketing tactics that can be found in marketing, PR, sales, or politics. It entails disseminating a negative sentiment regardless of technical benefits, quality, or usability. FUD also ignores the genuine worth of the products or services. It is primarily used to influence perception by spreading either false or unsubstantiated information to cause fear and uncertainty among people.
Even though the approach of deliberately spreading false information for certain needs is as old as time, the term FUD, as we know it today, was first used by lead engineer Gene Amdahl in 1975, when he left IBM and founded his own company, Amdahl Corporation. Back then, Amdahl used the term “FUD” to describe the aggressive marketing strategy that was employed by IBM to thwart customers from choosing Amdahl Corporation’s products: IBM was spreading false information about the low quality and inadequate reliability of Amdahl products, even though the truth was quite the opposite: Amdahl’s computers were smaller, faster, and cheaper than IBM’s hardware. IBM saw Amdahl as a threat to their business, so they were trying to do their best to make up stories both about Amdahl and themselves as well. For instance, in 1977, IBM went so far with their FUD when promoting their yet undeveloped and practically non-existent processors, that later this kind of FUD got its own special name-“vapourware”. This term would be later used to describe a product that has no tangible evidence, apart from the company’s announcement.
A few decades later, specifically in the end of 1990-s and 2000-s, the term FUD became highly associated with Microsoft. The tech giant was accused of using entire departments to spread FUD among e-integrators and Microsoft partners to cause uncertainty about the products of their competitors’, like Linux and IBM. Moreover, Microsoft even went so far with their FUD that they decided to fund lawsuits against their competitors a few years later, to make them look unreliable and untrustworthy in the eyes of their consumers.

Nowadays, spreading FUD is pretty common in the crypto community. Taking into account the notorious crypto’s volatility, the tactics of circulating information that drives fear and uncertainty can sometimes have a huge impact on a given coin or token’s price. Let’s take a closer look at what FUD looks like in the crypto markets.

FUD had become a part and parcel of the whole crypto space practically from the first years of its existence. Remember the media’s negative coverage and statements from traditional financial institutions saying that Bitcoin is a bubble/fraud/scam? Certainly, nowadays you can rarely see such negative remarks about cryptocurrency since the crypto space has come a long way since 2011, but that does not mean that FUD has gone away-the only thing that changed is scale, since the number of proponents of the opinion that the whole crypto space is nothing but a huge scam has decreased dramatically. Nowadays, FUD is more often focused on specific projects than the whole crypto industry.

Whenever a new project or coin appears on the market, it inevitably faces high volatility and price fluctuations, which sometimes cause doubt and uncertainty right there. Some of the projects compete with each other; others are made with the intention of having the best features in the whole crypto space. In that regard, FUD can be spread by competitors themselves or by their holders to harm a project’s price and reputation or to take advantage of price flux, i.e., with the intention of buying it at a lower price.

However, you shouldn’t confuse FUD with legitimate concerns about possible tech issues or potential scams. So how can you distinguish one from another?

If an investor is concerned about real issues, be they technical ones, marketing, or (social) media coverage that can somehow influence a project, and thus his or her funds, then this should be seen as a legitimate concern. For instance, back in 2011, investors were concerned about Bitcoin’s scalability, slow block generation, and overall bulkiness, which could affect transaction speed and fees. This concern was entirely justified, and due to that concern, Litecoin was born. The developer, former Google engineer Charlie Lee, has called it a “lite version of Bitcoin”. It was based on Bitcoin’s original source code and was technically very similar to Bitcoin, with one major difference: block generation takes only 2.5 minutes, whereas Bitcoin takes 10. Because of its speed and lightness, Litecoin was given that name. So, as you can see, a legitimate concern is always based on valid points, it never comes from thin air, and it usually leads to problem-solving.

On the other hand, statements made like those by JPMorgan’s CEO Jamie Diamon back in 2017, calling Bitcoin “a fraud” and saying things like “It’s just not a real thing, eventually it will be closed” and “It’s worse than tulip bulbs” are a prime example of FUD. These claims are not targeting any specific issues Bitcoin might have, nor do they provide any objective data – these are strong words, however solely subjective. After these statements, Bitcoin immediately lost around 2% of its price. Thus, Diamon’s words caused fear, uncertainty, and doubt.

Can FUD affect crypto in the long-term?

We’ve already mentioned above that crypto FUD can have a negative impact on the value of your chosen crypto project. However, it usually has a short lifespan due to its lack of objectivity, so it doesn’t have a long-term effect in most cases. Just try to revive in your memory how many times Bitcoin was “sentenced” to quick death throughout all these years: Complete ban on Bitcoin; Bitcoin faces obsolescence; Bitcoin will be dethroned and etc, this list can go on further. Reality is, after more than 12 years on the market, Bitcoin is still dominating the whole crypto market, it wasn’t banned nor was it dethroned by any other cryptocurrency. So, all this FUD quickly died out, it didn’t impact Bitcoin in the long run and the crypto market continues its normal behavior with periodic bullish and bearish markets.

FUD when trading crypto. What should you do?

It is inevitable that you’ll have to face FUD during your crypto trading routine, one way or another. So, what should you do if you notice that your preferred cryptocurrency is experiencing fear and uncertainty (whether real or imagined)?
The most important thing you should always do is keep your head cool. Do not panic sell: do your due diligence, read all the accusations thoroughly, try to find answers to all the issues that are being mentioned, and see if these accusations are objective.
Read the whitepaper, try to reach the development team via social media like Twitter or Telegram to get all the info you need, and gather the data from other sources so you can get a full picture. Remember, if you’ve chosen to invest in that one specific project, then there has to be a solid reason why you’ve decided to do that in the first place. Do not just give up on your chosen project simply because someone told you to do so.
If you’re unable to find any evidence that all those negative statements you’re witnessing have a solid basis, then you’re dealing with FUD, and not legitimate concerns.

Should you trade during FUD?

You might think of FUD as something very negative for crypto trading. However, sometimes trading and investing in crypto during times of uncertainty and fear may be quite beneficial.
When FUD starts, those who are not willing to DYOR and wait until the doubt is gone tend to panic sell. This can sometimes present you with a very nice entry point.
However, it mostly depends on your chosen cryptocurrency. The more market capitalization and the more holders the coin has, the better it will deal with FUD. On the other hand, when dealing with freshly made altcoins, which can be extremely volatile even by crypto standards, FUD can be damaging, and there is a high chance that the coin’s price will not recover.

Fear, uncertainty, and doubt stand for marketing tactics that can be found in marketing, PR, sales, or politics. It entails disseminating a negative sentiment regardless of technical benefits, quality, or usability.

Should you trade during FUD?

Sometimes trading and investing in crypto during times of uncertainty and fear may be quite beneficial.
When FUD starts, those who are not willing to DYOR and wait until the doubt is gone tend to panic sell. This can sometimes present you with a very nice entry point.