What Happened To LUNA & UST? 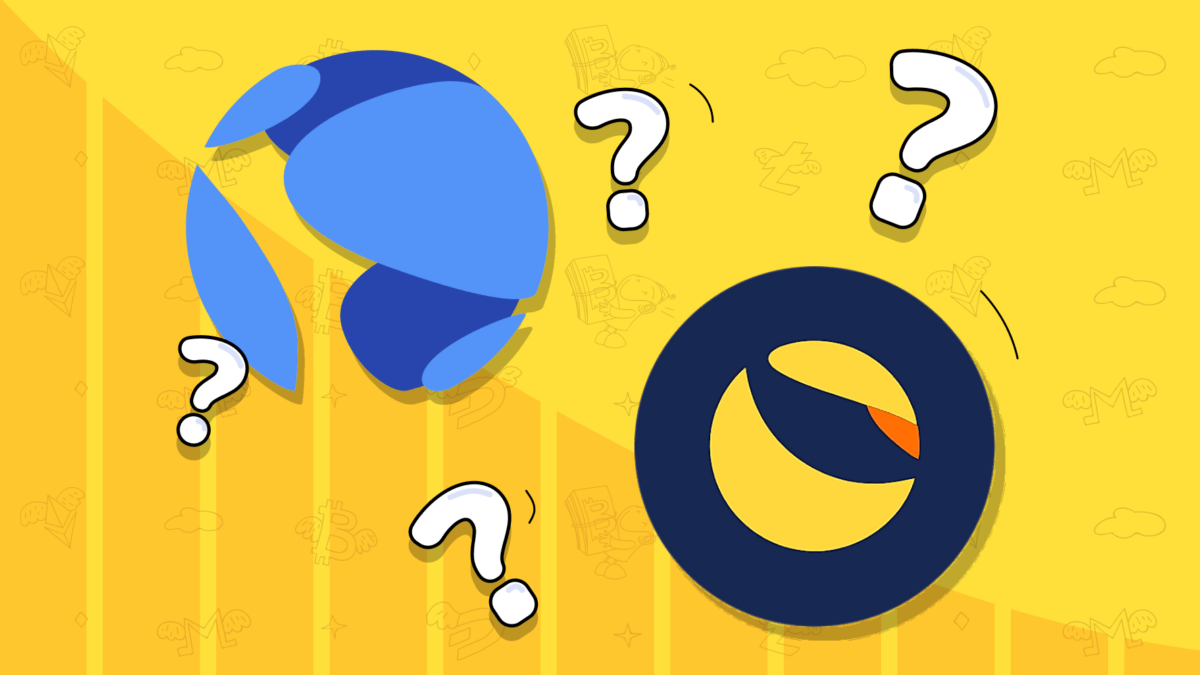 For the last few days, crypto investors and traders have found themselves in complete disarray due to heavy crypto market bleeding. The reason for that brutal fall is that Terra (LUNA)’s and UST’s prices have plummeted by more than 99% and 70%, respectively, and now LUNA is nearly worthless (as of 17.05, it’s price is 0.00018) and UST is trading at $0.12. So, why did it crash so hard, and why did it happen at all? Let’s take a look at what happened.

Why did LUNA plummet?

Just a couple of weeks ago, Terra was in the top 10 projects by market capitalization, with a price of more than $80 per their LUNA coin. In addition, for the last few years, Terra has been building its fame and reputation as one of the leaders in the stablecoin space. Now, it seems that all this reputation is gone.
The reason for this is that Terra Protocol’s algorithmic stablecoin UST has lost its peg to the United States Dollar, and instead of $1 it costs around $0.12 (as of 17.05), and it might go even lower.

Unlike stablecoins like USDC or USDT that are backed by fiat money, the UST stablecoin, being an algorithmic stablecoin, is backed by an algorithm that maintains its price. Backing up entails minting or burning LUNA/UST; thus, when one UST is minted, the equivalent of one LUNA is burned, and vice versa.

Here’s what was the key to UST retaining its peg: 1 UST can always be exchanged for $1 worth of LUNA. The bet was on the fact that once the UST goes below or above $1, the arbitrage traders will be jumping on the opportunity to make profits off of it, and the UST price will return to $1. For example, if the price of 1 UST goes down and is equal to, let’s say, $0.97, what the arbitrage traders will then do is convert 1 UST (worth $0.97) into a Luna amount that is worth $1 and then sell this amount of Luna for fiat (or another stablecoin worth $1) and get $1, thus making 3 cents in profit. As a result, two things happen: 1) people buying UST raises the price, and 2) UST burned during its exchange to LUNA reduces supply. As a result, the price of UST came back to $1. The same goes for when the price of UST goes above $1.
So, to put it simply, the stability of UST is connected to LUNA as well as to the traders’ behavior when the price of UST goes below or above $1. Yet, as we later found out, it was not counting on extreme sell-offs and market panic.

Terra founder Do Kwon has also created the Luna Foundation Guard (LFG), a company that has one goal— to protect the UST peg. Every time it was facing a minor drop in the price, LFG was spending some amount of money from their $1.5 billion in Bitcoin reserves to buy UST until it went back to $1.

Talking about Terra it is necessary to say that another pillar of UST-LUNA economics was Anchor — Terra’s DeFi lending protocol (that also played its role in the recent crash). To make traders and investors burn LUNA for UST and also to manage the UST circulating supply, the development team offered an insanely huge interest: 19.5% yield on UST staking via the Anchor Protocol, a DeFi lending platform. However, starting from May 2nd, the interest rate was lowered by 1.5%, down to 18%, and every following month the Anchor Protocol would have decreased the interest rate.
Before May 7th, more than 70% of UST’s circulating supply was staked. However, everything has changed in a matter of days.
More than $2 billion worth of UST was unstaked, and most of them were immediately sold. And this was the beginning of the ripple effect. That resulted in the UST price dump, making it go down to 91 cents. Crypto traders saw that as an opportunity and tried to take advantage of the arbitrage, exchanging $0.90 worth of UST for 1 $of Luna. However, they soon realized that there was one crucial issue with that matter: only $100 million worth of UST is allowed to be burned for LUNA per day.

Then the panic kicked in, and traders and investors started to sell their UST for USDT, USD, and other currencies just to save what they could before the massive fall. All that led to a massive increase in the circulating supply of LUNA, and thus, the LUNA price crashed too. To be more precise, the number of LUNA’s circulating supply went from 345 million on May 5th up to 6.5 trillion on May 13th. To call that a monumental increase would be a monumental understatement.

On May 9th, Do Kwon shared on his social media account an LFG Council decision, stating that the LFG Council has voted to deploy $1.5 billion to save UST and LUNA.
It is difficult to say whether selling Bitcoin reserves in an attempt to prevent UST from further depegging will actually have an effect. However, what we can say now for certain is that this action affects the whole crypto market by sending Bitcoin below the $30,000 mark.

It is hard to say for certain right now what this initial $2 billion worth of UST sell off was: a reaction to a possible bearish trend, a targeted attack on Terra’s protocol, an attempt to manipulate the market, or something else. We might know more when the time comes and when everything will be settled.

Nevertheless, what we know for certain is that after the UST crash, the LUNA’s price began to fall, and traders started to lose faith in these coins. All that resulted in overall market bleeding.

What is next and is there hope for LUNA and UST?

On May 13th, Do Kwon proposed the “Revival Plan”, in which validators should reset the network ownership to 1 billion tokens, distributed among LUNA holders before the depegging (40%, 400 mil); UST holders pro-rata at the time of the new network upgrade (40% as well); LUNA holders at the final moment of the chain halt (10%, 100 mil); and the rest 10% should be sent to the Community Pool to fund future development.

Kwon has officially stated that Terra needs a fresh start, UST was a failed stablecoin, and the community “must achieve a speedy consensus.”

On May 16th, Do Kwon proposed another solution to revive the Terra ecosystem, the so-called “Revival Plan 2”. In this proposal, Kwon reveals a plan to hard fork Terra, abandon its algorithmic stablecoin, and launch a new cryptocurrency to replace LUNA.
Do Kwon stated that the existing blockchain Terra will be called Terra Classic, and the token LUNA will be changed into LUNA Classic (LUNC).
Only 1,000,000,000 of new LUNA will be available in Terra, and this new LUNA will be airdropped to LUNA Classic holders, LUNA Classic stakeholders, residual UST holders, and essential app developers of Terra Classic.

Some of the experts, like crypto and Forex tech analyst Kelvin Maina believe, that there is a slim chance for LUNA to recover, but with a share of skepticism. Specifically, he wrote that “For LUNA to recover, they will need to address the problem and show clearly that such a drop will not happen again. As an analyst, I expect to see a bump in LUNA prices after UST is pegged back to the dollar. I also expect the prices to start recovering after the Terra project shows that similar problems will not happen in the future.”

If we look at the situation objectively, then it is definitely not good. Terra has pretty much lost not only a majority of their holders and investors, but also their reputation. They could not hold the price of their stablecoin, and in general, this whole situation showed how unreliable and fragile their protocol is. So, even if we suppose that UST will somehow get back to $1.00, there is a high chance that people will not trust it anymore as they did before the fall. Moreover, even if Do Kwon and his team somehow revive the UST and LUNA, the market can easily bring those coins down again.

Furthermore, social media is now flooded with stories from people who have lost thousands, if not hundreds of thousands, of dollars as a result of the crash and are unsure whether they will ever recover.

Binance has already halted LUNA and UST withdrawals, and Coinbase users are outraged because the exchange delayed the withdrawals.

Moreover, some of them attempted to send wormhole LUNA and UST to their ERC-20 exchange wallets but were unsuccessful because the company does not support them, and thus the tokens disappeared. Coinbase CEO Brian Armstrong does not comment on the situation, which makes the community even more furious.
So the snowball is still growing, and it seems that it will affect the whole crypto space, not just the market, and the consequences are still yet to be seen.

Is there hope for LUNA and UST?

If we look at the situation objectively, then it is definitely not good. Terra has pretty much lost not only a majority of their holders and investors, but also their reputation. They could not hold the price of their stablecoin, and in general, this whole situation showed how unreliable and fragile their protocol is. So, even if we suppose that UST will somehow get back to $1.00, there is a high chance that people will not trust it anymore as they did before the fall.