What Can We Learn From Previous Crypto Bear Markets? 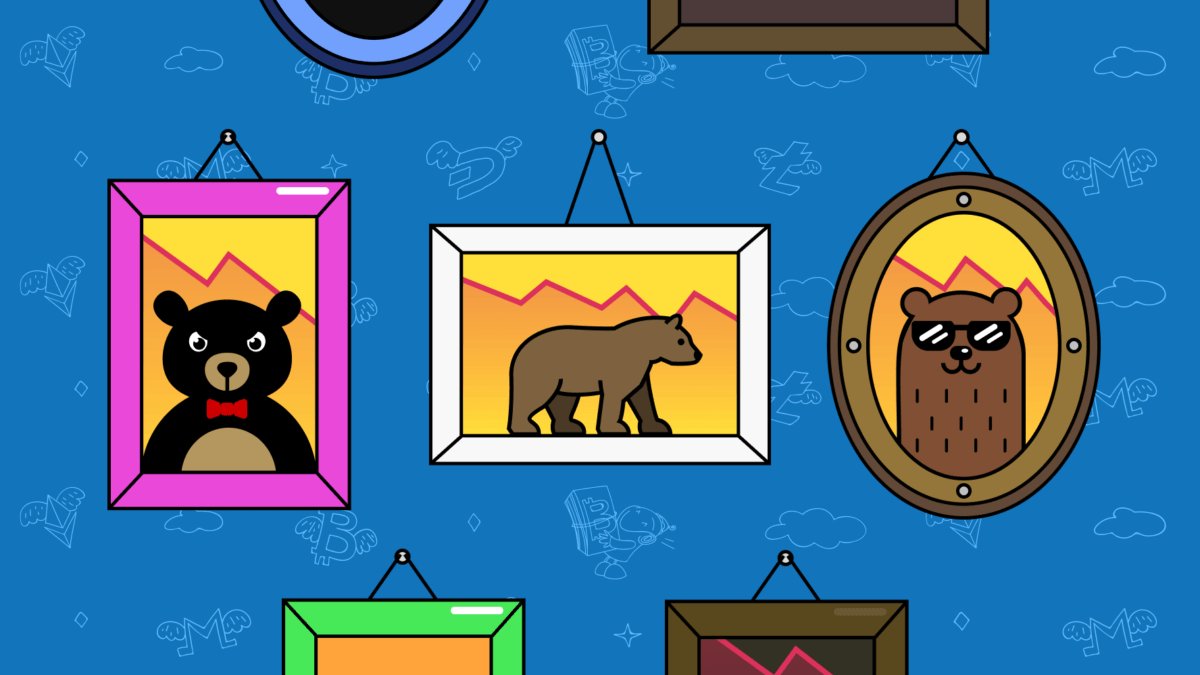 After the night comes the day, and after the crypto winter comes the crypto spring. However, even though a bearish market is usually considered something negative, especially among inexperienced traders, it’s a vital part of the whole industry, and it can teach all of us a lesson or two.

In this article, we will try to understand what lessons the previous (and ongoing!) bear markets have taught us and whether you should be worried when things start to go south. So let’s dive in!

What is the bear market?

Bearish and bullish sentiments are used to define the level of investors’ confidence and trust in the current crypto market status and performance. In this sense, a “bull market” refers to a market that is experiencing an uptrend with rising prices, and a “bear market” refers to a market that is experiencing a downtrend with declining prices. Simply put, both terms are typically used when a market experiences a significant price swing (at least 20% and more) or when there is a long period of an upward or downward trend.

The term “bear market” describes a period when traders and investors lose faith in the crypto market, which results in a situation where trading volume declines, supply outweighs demand, and prices begin to fall. In this long and painful period of falling prices, uncertainty, and doubt, this sentiment forced you to sell your assets out of fear and anxiety rather than buy more, hold onto what you have, and wait for growth to resume.

It is crucial to keep in mind that a correction — a quick drop in an asset’s price when it rises over an acceptable level — should not be mistaken with a bear market. Such a drop typically represents at least 10% of a previously reached record high, and occasionally, a correction might start a bear market by inciting panic selling. But they are not the same thing, and they shouldn’t be confused with one another.

Unlike the stock market, which already has years of history and relevant data, it is still pretty hard for the crypto market to predict even the approximate time when the bearish trend will end or if the prices have already reached their bottom. All that is because of the overall crypto market’s youth and on-going development.

Still, even though bearish trends might look like something negative, they actually bring along some benefits, and since we’ve all experienced this rollercoaster ride more than once, we can make a lesson or two out of it.

Even though crypto winters and bearish trends do not look so plausible on the surface, they are still a vital part of the crypto ecosystem and its overall health and well-being. So what can we learn from previous crypto bear markets?

Bearish trend cleans down the market

You might think that constantly pumping the crypto market with billions of dollars is something that we can all benefit from, but there is an issue here: because everything is green and blooming, the crypto industry draws too many people with “bad reasons”— that is what Bertrand Perez, CEO of the Web3 Foundation, believes.

According to him, a bear market allows the industry to “clear” the wrong people and “bad projects,” allowing only “legitimate” ones to stay. When such an exodus happens, developers can focus only on the development and building and “forget about the valuation of the token.” Perez believes that during bearish trends, “everyone thinks about making a fortune, which is the wrong mindset.”

Perez is not the only prominent figure that thinks that way. Mihailo Bjelic, Polygon’s co-founder also thinks that bearish markets are “necessary”.
In his opinion, the whole crypto market has become too irrational and reckless to a certain extent. So when the crypto market reaches a certain point of such recklessness, bearish sentiment in the end becomes a “healthy” thing.

Bitcoin Suisse CEO Dirk Klee has also spoken in the same manner. In fact, he goes even further, saying that bear markets are “what the industry needs in order to mature further”, and these periods can help to test the “quality, stability and security of crypto services”.

Trezor Bitcoin analyst Josef Tětek thinks that bear market is good not only for the overall crypto space, but also for Bitcoin in general, especially in the long term, because it helps with “cleansing the market from leverage, scams and dishonest institutions”.

This is just the tip of the iceberg, but you can probably see the pattern here. While the average trader or investor may not feel optimistic during bearish trends, they, in fact, play a role in correcting what needs to be corrected and assisting the entire crypto space in ridding itself of the excessive number of shady projects and institutions whose sole goal is to make a quick buck.

It might not be so obvious, but the decrease in money flows can actually push forward the technology and change the whole crypto industry.
For instance, in January 2016, when a bearish trend was still reigning in the crypto market, a major project was developed by scientists Joseph Poon and Thaddeus Dryja that helped to make Bitcoin transactions faster and cheaper.
Yes, we’re talking about The Lightning Network – a layer 2 payment protocol layered on top of Bitcoin, that solved one of Bitcoin’s biggest drawbacks – lack of scalability. Main Bitcoin blockchain (layer 1) couldn’t handle more than 10 transactions per second, and with Lightning Network it is now possible to process up to 1 million transactions per second.

Another example is Uniswap, a decentralized exchange that was developed and brought to the public in November 2018, during another crypto bear market. It certainly did put its name in the crypto world’s history, since nowadays it is one of the most popular, trusted and well known DEXes on the market, with a total trading volume of more than $1 billion (24h). One of the core advantages of Uniswap lies in its technology: instead of the conventional order book-based exchange model, it introduced the automated market maker (AMM) model. We’ve already covered how AMM works and how DEXes and CEXes operate in general in one of our recent articles, so you are welcome to learn more about them.

Perhaps no one will argue that the year 2021 was the year of NFT. But what you probably didn’t know is that the first and largest digital NFT marketplace, OpenSea, was launched at the end of 2017, just a few months before the bearish trend kicked in. Even despite the fact that the NFT market was not that big and popular back then, OpenSea not only managed to survive during then bear markets, but also became the №1 NFT marketplace in the crypto world, reaching an astonishing $4.86 billion in terms of trading volume back in January 2021. All that happened due to OpenSea’s willingness to focus solely on improving their core product, and not immediate profit.
David Finzer, co-founder of OpenSea, said that “It was our willingness to be in the space for the long haul, regardless of the immediate growth trajectory. We wanted to build a decentralized marketplace for NFTs, and we were fine with it being small for 3-4 years.”

Bear market creates the fundamentals for a bull market

Every seasoned crypto investor knows that investing is a marathon, not a sprint, and that cryptocurrency has demonstrated its ability more than once to recover from losses despite having a much shorter history than the stock market. But that’s not all.
This recovery comes with a prolonged bullish market that wouldn’t be possible without the bearish one. That’s what Ryan Selkis, the founder of crypto data analysis company Messari, believes in.Selkis thinks that the turbulence that is usually brought by a bearish trend is healthy, as it creates the necessary fundamentals for the next bull run. In his opinion, when bear markets arrive, companies or blockchains that struggle to provide any solid utility and use cases inevitably vanish out of business. To make sure that they can remain competitive on the market, blockchains and companies must either strategize anew or further develop their ultimate visions so they don’t become obsolete.
When all the “dead wood” is gone, there is plenty of space for new competitors. So in his opinion, bear markets can help with “getting the right people in the room,”  and these people are usually the ones who help lead the next wave of innovation and growth, and hence the next bull run.

Ben Forman, the founder of ParaFi Capital, also believes that bear markets are a great opportunity for venture capitalists and private equity investors to search for and invest in companies that have “time sensitive financing needs”. Certainly, in the near term the current crypto market “has developed into a volatile, macro-driven asset class”, but, Forman says that more investors and venture capitalists are “taking a multi-decade view” of crypto. He also mentions that the previous bear cycles in 2018 and 2019 ended up with great results after all.
So when the bear market kicks in, those investors who decide to put their money into innovative projects not only create the necessary conditions for such projects to live and grow, thus creating the fundamentals for a bullish cycle, but also thrive financially in the long run.

In essence, the basis for the next bull run is largely developed and created during the bear markets by washing out the “dead wood” and attracting those who are willing to stay for a long time and do their best to make the crypto space a more evolved and technologically stronger place.

If you want to know more about tips and strategies for surviving during the bearish trend, check out our article about it here.

Sometimes crypto investors, especially those who don’t have much experience yet, think that a crypto bear market is something negative. However, a bear market is neither good nor bad; it’s just a part of the whole market system that moves in cycles. So it makes sense to invest during a bear market. You just need to apply different strategies.

As for the whole crypto space in general, bear markets are vital for the next bull run. Institutions with shady intentions are scared away, illegitimate projects with no use cases fade away, and those developers and capitalists who support the technology can concentrate on making the crypto world a better and more advanced place.

What does bear market mean?

The term “bear market” describes a period when traders and investors lose faith in the crypto market, which results in a situation where trading volume declines, supply outweighs demand, and prices begin to fall.

Is the bear market bad for crypto?

Sometimes crypto investors, especially those who don’t have much experience yet, think that a crypto bear market is something negative. However, a bear market is neither good nor bad; it’s just a part of the whole market system that moves in cycles.