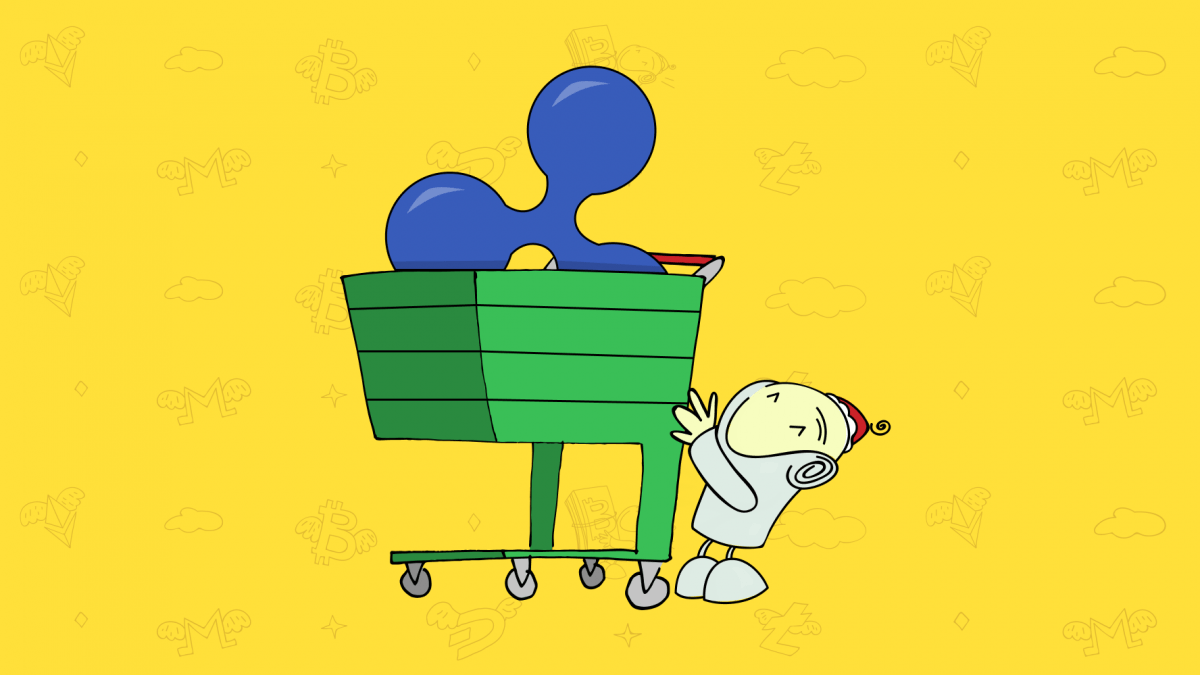 There are two important modes of thinking in classical stock trading:

The theory behind technical analysis — the statistical tools — is the same between all markets. But estimates of the actual worth of the asset work very differently based on asset class. Crypto assets are tricky in that sense: seemingly homogenous environment, a cryptocurrency exchange, lists all the tickers together, regardless of whether they are closer to:

The underlying worth of a particular crypto asset will likely have to be calculated in different ways, based on the knowledge of its internal mechanics.

In this series of articles we present approaches to assessing crypto assets based on their underlying class, as stepping stones towards a better understanding of the nature and intrinsic value of the financial instruments available for trading cryptocurrency on the exchanges via TradeSanta.

Following the recent news about the partnership that Swift is entering with R3, we picked Ripple’s XRP as an example of a popular trading token concealing an underlying layer of an enterprise venture. It presents a decent case of a mixed medium of exchange / utility token class promoted and distributed by a strong centralized business. We open with an analysis of the project as a whole, while the current metrics and state of affairs will be covered in the next article.

Ripple started in 2012 as a payment network for fast money transfers, including cross-border payments in multiple currencies. One of its primarily targeted market niches was an attempt to compete with SWIFT, banking on final settlement in seconds, regardless of the kind and size of payment,— and no chargebacks.

At present Ripple is a blockchain payment network based on its own original protocol, which was designed as a replacement to legacy payment and settlement system. It supports custom tokens and has its own fully on-chain  decentralized exchange (DEX): users can create token exchange orders and other users can consume them in their transactions. Users can also create objects such as trust lines, cross-country payments and payment channels, which requires reserving XRP to create an object and burning XRP to send a transaction, thus giving XRP utility value.

From the beginning the main focus of Ripple was to ensure more efficient transactions between the world’s financial institutions. Its underlying technology is RippleNet, the blockchain ledger, but some of the end-products that Ripple offers abstract away the blockchain components.

The main products are a token-free banking solution for streamlining settlement (xCurrent) and a blockchain solution for on-demand liquidity (xRapid). According to the Ripple’s own words1, “users of the Ripple protocol are not required to use XRP as a medium of exchange or as a store of value” since the two entities are independent of each other. Combined, the product roster is:

There is also the ledger itself, which can be interfaced with directly (for instance, through a client) as a traditional blockchain network. Both XRP token and records representing mutual account balances between banks (i.e. within xCurrent) exist together on Ripple Network.While the products may step away from the ledger, Ripple is still first and foremost viewed as a blockchain company, with its enterprise solutions being rather a stepping stone for the customers towards full-scale blockchain adoption. XRP token, while having little connection to some of the products, is still affected by the company’s general success. At the end of the day, every product is a way for Ripple to achieve crypto market penetration for its ledger, which is in turn fueled by the token.

Ripple Ledger is account-based (as opposed to UTXO-based, it is like Ethereum and unlike Bitcoin) and scales to up to 1500 tx/s. This throughput beats first generation blockchain payment systems, is on par with the current state of the market, and is still much lower than VISA.

The blockchain ledger is permissionless in a sense that anybody can connect to a network and transact, but ordinary nodes cannot easily participate in consensus. The network is based on the Ripple Consensus Algorithm, in which each node in the network chooses its own set of nodes to reach a consensus on transactions. Despite formally being presented as a permissionless network, Ripple cannot be secure without a centralized authority curating the trusted validator list, as there is no way for nodes to determine trustworthy validators and there is also an additional requirement for validator sets to have an intersect, further cementing the need for a centralized maintainer. This leaves the network highly centralized, with no apparent way to decentralization without a major architecture rework. In addition, regular network participants are also not economically incentivized to become validators, since transaction fees are burned instead of being distributed to network maintainers,– which further cements centralization.

Overall, it is sufficiently fast for current and close future operations, but remains centralized and therefore may lose in the long run to a solution with stronger claims to decentralization. On the other hand, Ripple’s degree of control may be well worth it for more conservative banks and financial insitutions that could later on request their own validator nodes be added to the recommended list.

There are three general situations when XRP coin is used:

The total lifetime supply of XRP is 100 billion, out which currently about 52.4 billion XRP are controlled by Ripple Labs, with the bulk of it locked away in an escrow that releases 1 billion every month. The founders – Chris Larsen, Arthur Britto and Jed McCaleb – directly received 20 billion XRP coins, although they allegedly have either sold or donated to charity the majority of their coins. Their ability to sell is constrained by average daily volume of XRP trading (on Ripple DEX), which is enforced by Ripple Labs acting as a broker while physically controlling the accounts. This prevents the founders from affecting the market price of XRP by selling big amounts of their holdings in limited time frames.

The 1 billion XRP that is released from lockup each month is intended for either selling or incentivizing potential partners and existing stakeholders. If the entire sum is not spent, the remainder is put back into the lockup. In the table below we can see that the majority of released XRP remained unspent in 2018. Overall, Ripple has seen a huge spike in trading volume in Q1 2018 due to remaining inertia from the end of 2017, while through the rest of the year the volume was somewhat stable.

The table below tracks cryptocurrency token release results quarterly: 1 billion XRP comes out of escrow each month, and is then sold directly (in unlimited amounts, column 2) or on Ripple DEX (with limits measured in percentage of daily exchange volume, columns 3 and 4). The XRP unsold at the end of the quarter is put back in escrow (last column).

Who invested in Ripple?

Another aspect of the company’s well-being is its institutional and investor support: it can be evident of traction the company is gaining in the business world.

After a year and a half of inner struggles and defending XRP market, Ripple Labs proved to be standing firm for long, and the second big investment round followed. May 2015 ended for Ripple Labs with $28 M from AME Cloud Ventures, China Growth Capital, and other high-level VCs7. Then, in autumn, the company attracted $4 M more from Seagate Technology, Santander InnoVentures and CME Ventures. 2016 has certainly become the most successful year so far in terms of investments for Ripple. In January Japaneese SBI Holdings put ￥3 bil (~$25 M) seed into Ripple, and September Series B resulted in the biggest investment amount for the company — $55 M from various giants such as Standard Chartered, Accenture and SCB Digital Ventures.

How Ripple grows its business?

Growth plan is vital for the future of the company: it defines token and product sales and drives adoption.  Establishing partnerships has always been at the backbone of Ripple business strategy. All Ripple partners are members of the RippleNet — the Ripple’s global network of payment providers connecting various payment networks of financial institutions, digital asset exchanges and corporate entities. Ripple states that there are “over 100 customers on the network now and more than 80 are banks that span every corner of the globe”, including “11 of the world’s biggest banks”.

Ripple partnerships can be divided on the basis of product implementation and XRP coin usage:

Approximately 120+ financial Institutions now use Ripple’s xCurrent system, the most notable are Santander  and American Express. The Ripple strategy is to eventually transfer xCurrent partners onto the xRapid System. Key advantages for utilizing xRapid over xCurrent are source liquidity, a 40-70% cost savings, real-time payments and near instant 2-3 second transactions.

A list of companies, financial institutions and banks in the xRapid sandbox8, which are testing, accepting (XRP) and/or utilizing the xRapid System via the XRP Ledger, includes more than 30 companies worldwide. Among this list are such prominent banking giants as Banco Santander, Scotiabank, Nordea, NAB (National Australia Bank), Barclays, RBC (Royal Bank of Canada), and MTOs like Western Union, Mercury FX, Cambridge Global Payments and MoneyGram. Six more are even accepting XRP, including FlashFX (Australia) and Asia MTM (Hong Kong).

Due to the lack of one official resource of RippleNet participants, we turn to the community-created ones. There are numerous lengthy lists of Ripple partnerships with the biggest one containing 181 Ripple partners and 16 Ripple-affiliated organisations. This January Ripple announced 13 more partnerships, claiming to ‘officially surpass the 200 mark’.

The participants of RippleNet currently operate in over 40 countries across six continents. Several interactive community-created maps and visualisations of Ripple partnerships illustrate the vast reach of Ripple9, and it doesn’t seem to slow down even after the recent announcement about SWIFT partnership with R3, enabling “Corda’s network participants to authorize and settle payments with the help of a gateway called GPI Link”. SWIFT has been piloting blockchain solutions since spring 2017, and a year later published positive results of the PoC on Hyperledger Fabric.

The long-lasting Ripple’s public ‘rivalry’ with SWIFT has escalated when in November 2018, the Ripple CEO explicitly confirmed Ripple’s plans to beat SWIFT banking network. And although this partnership might strengthen the SWIFT’s position in the fintech blockchain race, Ripple could still benefit from the rise of XRP coins demand since R3’s Corda Settler also uses XRP to settle transactions.

The company also takes measures to maintain the Ripple brand image as the FinTech pioneer. In May 2018 Ripple started the Xpring initiative that “supports businesses that would see material benefit from building on the XRP Ledger” to broaden the network and increase XRP adoption. A month later the company also announced a University Blockchain Research Initiative, committing more that $50 M to support academic research and technical development into blockchain and other FinTech topics.

These are the essentials for the enterprise, its ledger, and the token. They represent the more static aspects of the company that are not likely to change drastically in the foreseeable future. In the next article, we will continue the  cryptocurrency analysis by turning to the current events and metrics that could be characteristic of the present well-being of the XRP token.

3. Of this amount, 11 billion is already spent, ~5.3 — have limits on sales *either court-ordered or enforced by Ripple Labs)

5. The estimated amount varies: Crunchbase has a different investor list with a different amount

9. However, the data integrity is questionable since there is limited public disclosure from the company, and some partners may use Ripple products on only a fraction of their coverage, which cannot be traced and is not reflected in aggregated info