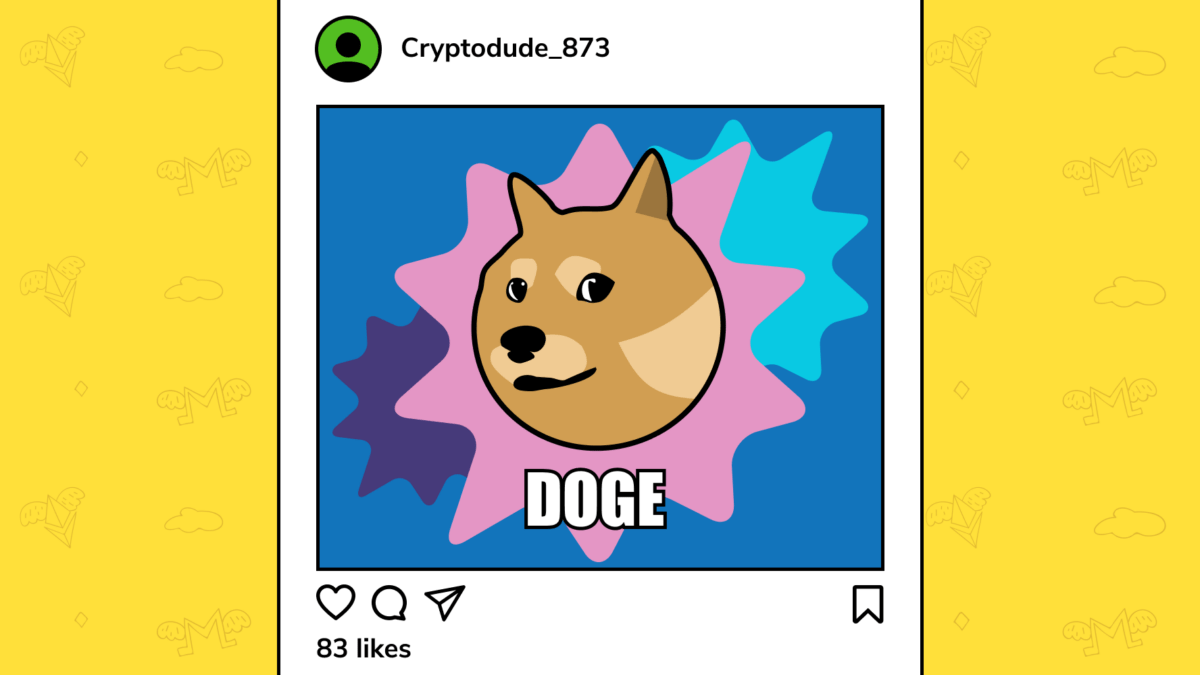 We all love watching memes in our spare time and sometimes even during working hours to blow off some steam and have a good laugh. However, in addition to boosting one’s mood, memes can shape the culture and move the narrative forward to the masses. In this article, we will dissect the crypto meme culture, take a look at some of the funniest crypto memes, and try to measure their value in the whole crypto discourse. So let’s begin!

What are memes and how do they work in the crypto space?

The word meme itself is a neologism that was first mentioned in Richard Dawkins’ 1976 book “The Selfish Gene”, where Dawkins describes the word somewhat ambiguous: “a unit of cultural transmission”. Several decades later, the word “meme” became strongly associated with online images with upper and bottom text — sometimes funny, sometimes whacky, but most importantly, capable of going viral across the internet. Moreover, memes have become a somewhat universal language of the whole internet, a method of explanation of various events, personas, and phenomena in a simple yet comprehensive way. They can shape the existing discourse, or even create their own discourse on any kind of topic, and cryptospace is no exception. Moreover, sometimes memes go so far that they end up being a cryptocurrency itself—Dogecoin is the most vivid and well-known example. So, which narratives from the crypto space were pushed forward by the meme culture?

The origin of the meme HODL has its roots back in 2013 when a user by the name of GameKyuubi made a post on the well-known BitcoinTalk forum. He intended to write “I AM HOLDING” to demonstrate that despite the sharp increase in price, he was not planning to sell his coins, but instead he typed “I AM HODLING” and thus the meme was born.
In the modern days of crypto, investors use this word as motivation for each other to hold onto their faith and “hodl” their coins through the bearish trends and volatility spikes.

“Buy low, sell high” is a principle that every trader should follow if he or she wants to succeed. However, every market has a bearish and bullish cycle, and when the bear kicks in and prices go down, the particular call “buy the dip” can be heard all over the crypto forums, chats and blogs. Even presidents do not stand aside: in September 2021, when the crypto market was going through a bearish trend, the El Salvador president Nayib Bukele made a statement that he bought the dip.

The word “Lambo” stands for “Lamborghini,” a car that represents the wealth and well-being of its owner, as well as his social status. When Lambo?”, or its more common version, “Wen Lambo? “, refers to the question of when a cryptocurrency investment will be profitable enough for a user to purchase a Lamborghini. Even though it is still a joke, quite a few newcomers to crypto still believe they can become rich in just one day after investing in crypto, so sometimes “wen lamdo” is used to mock such infantile behavior.
Its origin is a little vague, but one of the versions refers to the event from 2013, when one of the users from anonymous board 4Chan bought a Lamborghini for 216.8433 Bitcoins, which was estimated around $209,995 back then.

When Bitcoin was worth less than a dollar, no one could have predicted the heights that it would reach years later. In the end, it did reach the moon: its price went from zero in 2009 to an astonishing $61K in October, 2021.
Nowadays, the catchphrase “to the moon” is used by investors to express their faith in the success of a crypto coin they’ve invested in. Alternatively, the same phrase can be used in a sarcastic way to express FUD (fear, uncertainty and doubt), or to mock other investors, especially when a particular coin goes through price swings.

In order to safeguard users’ money, Binance established the Secure Asset Fund for Users (SAFU) in July 2018. In other words, SAFU serves as an emergency insurance fund. Some time later, Binance CEO Changpeng Zhou (CZ) tweeted in his account “Funds are safu” when Binance was experiencing some unexpected maintenance. Ever since then, CZ uses this phrase to assure Binance users that everything is fine and they have nothing to worry about.
Back in the same 2018, a user named Bizonacci uploaded a video on his youtube channel called “Funds are SAFU” and thus the meme was born.
Nowadays, the crypto community uses both varians “Funds are SAFU” and “Funds are not SAFU”: the first version is used when funds are literally fine, and the latter one is used when something is fishy and there is no guarantee that the investments are secured.

NFT or Non-fungible token is a relatively new technology in the crypto space, however it has certainly got its own chunk of attention. Still, the situation with NFT is a little different from other crypto narratives. NFT memes are usually targeted at the investors themselves, rather than to push the whole technology forward, and that is because of the lack of understanding of NFT technology and/or sometimes because of a wish to mock NFT investors and technology. And there are quite a few reasons for this animosity.
First of all, there is the problem of gas prices. For instance, when Bored Ape NFTs had a sale, Etherum gas prices skyrocketed up to $3,300, even though some NFTs had an initial price of just $20. And regular crypto traders have to suffer along with NFT investors all together because of network congestion and high gas prices.
Secondly, even though NFT technology claims that you can become the sole owner of a piece of art, someone can still just steal it from you. OpenSea, one of the biggest NFT markets in the crypto space, has been hacked more than once, costing hundreds of thousands of dollars to NFT creators and investors. The same thing happened with NFT registration platform Premint, and hackers managed to steal 320 NFTs that were estimated at around $400,000. And that is only the tip of the iceberg, since there have been numerous cases of personal wallet hacking. So, even despite the fact that you might own the rights to one specific NFT, it does not mean that it can’t be stolen from you, since simple stealing can beat owning the rights here.
There are some other issues with NFTs that some people might not like: NFT’s are not environmentally friendly; some major video game companies force them into their products, which makes gamers frustrated; there is also an opinion that the NFT market is overrated, and the recent downfall of NFT prices can serve as evidence for that opinion.

Elon Musk’s tweets about the crypto space and specific coins have become a meme in and of themselves: celebrities have always had the ability to manipulate and mobilize their fan base, but Elon Musk took this ability to a whole new level. His tweets about crypto, and especially Dogecoin, can have a strong impact on the price. For instance, check out this chart from TradingView down below:

Such power demonstrates how Elon Musk can use this meme marketing to drive the meme community and force them to buy or sell Dogecoin. Certainly, such a phenomenon can once again prove that the crypto market still has ways to go in terms of maturity and volatility, if just one person, even a well-known one, can manipulate the price chart of a multi-billion dollar digital asset.

Dogecoin started as a crypto meme back in 2013, and has grown into one of the largest digital assets in the crypto space, with a market cap of more than 11 billion dollars. Moreover, this is a meme coin we’re talking about, so it does not have any real-life use cases. Thus, its value is held mostly on the community’s faith and not much else. Seriously though, tell us about “Much Wow” here!

Elon Musk is one of the main reasons why Dogecoin got so much attention and why it was able to skyrocket. On top of that, Dogecoin is the reason why we have a unique category of cryptocurrencies known as meme coins in the crypto space nowadays, such as Shiba Inu, Dogelon Mars, Baby Doge Coin, and more.

Let’s take a look at some of the most funniest crypto memes we’ve come across in the crypto space. Remember, they are funny because they are painfully relatable, so sit back and have a good laugh with us!

Well, all in all, even though a meme is something that we do not take seriously, the crypto community uses memes to generate hype around certain events, catch phrases, personalities, and cryptocurrencies themselves, and we should admit that the power of memes may have actually played its role in getting word about crypto out there.

What is a meme?

The word meme itself is a neologism that was first mentioned in Richard Dawkins’ 1976 book “The Selfish Gene”, where Dawkins describes the word somewhat ambiguous: “a unit of cultural transmission”.

The origin of the meme HODL has its roots back in 2013 when a user by the name of GameKyuubi made a post on the well-known BitcoinTalk forum. He intended to write “I AM HOLDING” to demonstrate that despite the sharp increase in price, he was not planning to sell his coins, but instead he typed “I AM HODLING” and thus the meme was born.